To get in contact email me at mike -at- mikesandler.org . 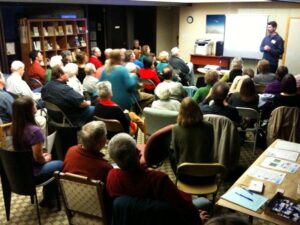 Mike Sandler is a climate change and sustainability professional.

In 2001, Mike co-founded, with Ann Hancock, the Climate Center https://theclimatecenter.org/  (formerly the Climate Protection Campaign) based in Sonoma County.

In 2017, he co-founded Virginia Clean Energy https://www.virginiacleanenergy.org/ , which is working to promote Community Choice Aggregation in the Commonwealth of Virginia.  He is currently on the Board of Directors of VCE.

He also is a co-founder of CapGlobalCarbon and joined the Board of Trustees of the Ireland-based Foundation for the Economics of Sustainability (FEASTA) in 2016.

From 2002-2006, Mike was Program Coordinator of the Community Clean Water Institute, working on water and climate issues. While there, Mike helped form the Redwood Empire Environmental Center, and sat on the Board of Town Hall Coalition, which works to protect forests and watersheds, and encourages citizen involvement in local participatory democracy.

From 2004-2006, Mike was a Planning Commissioner for the City of Sebastopol.

In 2007, Mike worked alongside author Peter Barnes and the Climate Protection Campaign to promote public trust characteristics in any proposed market mechanisms in California’s implementation of AB32, the Global Warming Solutions Act. His research was featured in “Climate Solutions: A Citizen’s Guide” and “Carbon Capping: A Citizen’s Guide.” More about this work can be found here. His top 3 recommendations to California can be found here.

He was Program Manager at the Sonoma County Regional Climate Protection Authority from July 2010 to May 2012.

In 2012 he moved from San Rafael, California to the Washington, DC area, and he lives with his sons in Northern Virginia. He worked as a government contractor and most recently as a Federal employee working on sustainable buildings, renewable energy, greenhouse gas reduction, and more.

He is a charter member of the U.S. Society for Ecological Economics.

From late 2006 to January 2008, Mike was Southern California Outreach Director for California Interfaith Power and Light. In this position, he worked with congregations to address global warming by educating and encouraging the faith community’s use of energy efficiency and renewable energy.

He holds a Master’s Program in Urban Planning from UCLA and a Bachelor’s degree in Political Economy from the University of California at Berkeley.

In the 21st century, the list of problems grows longer every day. It is easy to feel overwhelmed by problems such as global poverty, the disparity between rich and poor, overpopulation, and the loss of biodiversity. The omens I read about in the late 90’s are unfolding in a truly troubling manner. Scientists’ climate change predictions are being realized as billion dollar disasters from extreme weather events. I witness the dissonance between an economic system with an exponential growth imperative and the finite natural world.

If I had to list a single problem at the top of my list, it would be climate change. The climate crisis touches so many areas, from the energy we use every day to the stability of the most remote ecosystems. I worry about the problems of the world, but I am an optimist. I believe solutions exist. I believe that ideas can change behavior and that individuals can alter the course of history.

I am interested in sustainability and its practical application locally and regionally. In the 21st century we must address and hopefully reverse almost 50 years of auto-centric development. Our country is over-militarized. I am interested in systemic approaches to the challenges of water, energy, air quality, and climate change.

In the early 1990’s, I was troubled by the question, “Why are people in the 1st World so rich, and people in the 3rd World so poor?” After years of research and learning, I began to think the answer was in “market failure,” also known as “externalities.” The economic system considers human well-being an “externality,” as well as global sustainability, and the life support systems of the planet. Species extinction is an externality. In fact, the entire Earth is an externality. Money, on the other hand, is not an externality.

We are now well over 400 ppm CO2, and respected scientists are sounding the alarm that humanity has run out of time to come up with a global solution to the climate crisis. After my extensive research and readings, I believe that per capita equity, Contraction & Convergence, and a form of Carbon Sharing/Cap & Dividend is the best solution we have for economic and many other reasons.  My websites CapGlobalCarbon http://www.capglobalcarbon.org , Carbon Share, and Commons-Share http://www.commons-share.org promote those solutions and more.