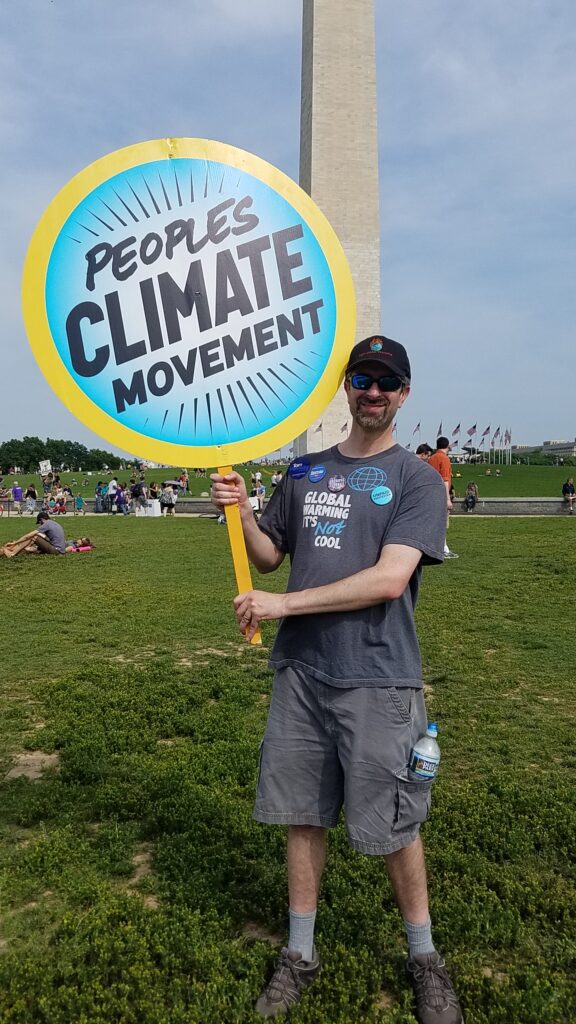 After I moving to Washington DC in 2012 I was able to participate in many rallies and marches for the climate.

Climate change is my #1 issue. It’s a crisis of immense proportions, and almost everything is at stake. I know, I wish it weren’t happening too. I have other things that I could be doing. Other generations have had to fight World War II, end slavery, or rebel against an empire and create a new republic. We get to tackle climate change.

Here are some links to projects I helped start or have worked on:

Carbon Share – I think this is a key solution to climate change. A type of cap and auction system that returns the value of increasingly scarce emissions to the people. The government caps GHG (carbon) emissions, sends every person their “Share” (a certificate denominated in tons: for example, 10 tons CO2), which people can sell to companies via banks or brokerages.

The Climate Center– Sonoma County – I co-founded the Center, then known as the Climate Protection Campaign, with Ann Hancock in 2001. We helped 9 cities and the County of Sonoma pass resolutions to reduce their GHGs. We promoted ICLEI’s Cities for Climate Protection at a regional level, and raised awareness among various stakeholder groups, building support for an aggressive local emissions reduction target.

Virginia Clean Energy – We are working to bring Community Choice Aggregation to local governments in the Commonwealth of Virginia.

CapGlobalCarbon – A citizen’s movement to form a Global Climate Trust to implement a science-based carbon cap and distribute revenues to citizen’s as a carbon dividend.  I led a delegation from the think tank FEASTA to COP-21 in Paris to present CapGlobalCarbon.  It could be a science-based alternative to the Paris Climate Agreement.

Sonoma County Regional Climate Protection Authority – I worked here as Program Manager from 2010-2012. It is a new agency created by State legislation to lead and coordinate climate protection efforts among the 9 cities, County, and special districts.

Bay Area Air Quality Management District Climate Protection Program – I wrote up a plan for this program in 2002. With the CPC, I encouraged the Air District to become a regional leader on climate change.

We need a Cap that ensures two things:

1) that everyone is treated fairly and equally in the system, and

A Cap versus a Tax: A Cap is a quantity restriction where price can fluctuate. A Carbon Tax sets a given price and allows the quantity of emissions to fluctuate. Although there is a debate between the camps of environmentalists and economists over which is better, I believe we need both a Cap and a Tax.

In fact, a Carbon Tax can act as a price floor in a Cap and Auction system. We will need local carbon fees to pay for local programs, and we’ll need an economy-wide cap and probably sector-specific caps to move the economy in theright overall direction and make sure emissions are actually reduced and all these market mechanisms don’t just make money for speculators or traders.

Carbon Capping programs could produce billions of dollars in capital flows, but who will benefit?
Some types of cap and trade programs only benefit polluting corporations. The design of the carbon market can determine who benefits.

Allocation of permits: If emission permits under the cap are given to polluters (the fossil fuel industry) for free, then the scarcity rent (value of permits produced by the limited supply under the cap) goes to those polluting companies. If, on the other hand, emission permits are auctioned or sold to those companies, then the right price signal is given to reduce emissions, and revenue is generated.

How to spend the revenue: This is the million (billion) dollar question. There are several possible answers to spending the revenue.

Carbon Share is a concept for a carbon market that returns the value of GHG emissions to people. www.carbonshare.org

Carbon Share provides each individual or household a Share of the year’s CO2 cap (for example: 16 tons), which may be sold to upstream companies via a bank or brokerage. In addition to a government auction market, we could have a public CO2 market that everyone can participate in.
I understand that transaction costs may be slightly higher if every person had to sell their own Share rather than have the government do it for them and just give them the dividend, but the price signal could be stronger when you have more shareholders selling rather than one (possibly corruptible) government auction. We’re talking trillions of dollars, so the more transparent, the better.

Why issue Shares instead of Cash Dividends? For some reason, I don’t mind California doing a Dividend, but I’m worried about who controls the Federal Government, and the tendency to siphon billions out of the Treasury when it should be going back to the people.

I actually like the idea that people would be given a choice on their tax form: “How would you like your climate allocation?”
And you have three check boxes: 1) Cash Dividend, 2) Tax Rebate, or 3) Share.
Here’s a line item on a future tax form: 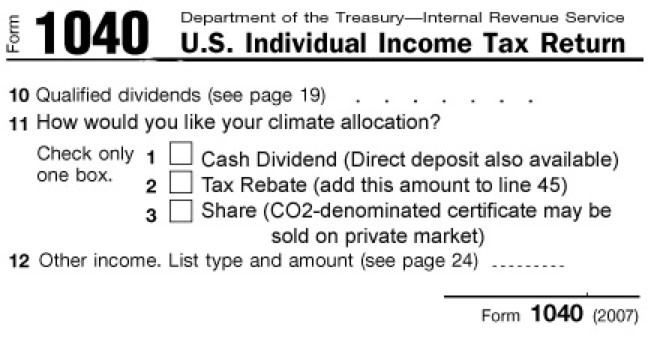 Cap and Dividend is a form of cap and auction (where polluters pay for the permits) that returns the auction revenues as rebates to consumers.

Cap and Invest would spend the auction revenues on green technologies and research and development. However, instead of using auction revenues, the investments could be funded by carbon fees on low-performing technologies – similar to the Clean Cars Feebate proposed by Union of Concerned Scientists.

3) Return revenues to consumers who will be paying higher fuel and electricity prices. This could be done with a cash dividend from a government auction, a tax rebate, or a Share.

4) A price floor would keep permit prices from falling too low, and provide a continued price signal to allow companies to make long term investments in low-carbon technologies.

At some point, there will be the need for a global institution that can manage the transition towards per capita equity in GHG emissions, be it through Contraction & Convergence, Cap and Share, Cap and Dividend, Kyoto2, or some other program. At that point, a Global Climate Trust would be established to facilitate interactions of governments and other organizations into a common framework. In the meantime, a citizen’s movement may be necessary to encourage the formation of such a trust, and to make contacts with groups around the world that are thinking in this way. Find out more at CapGlobalCarbon website. 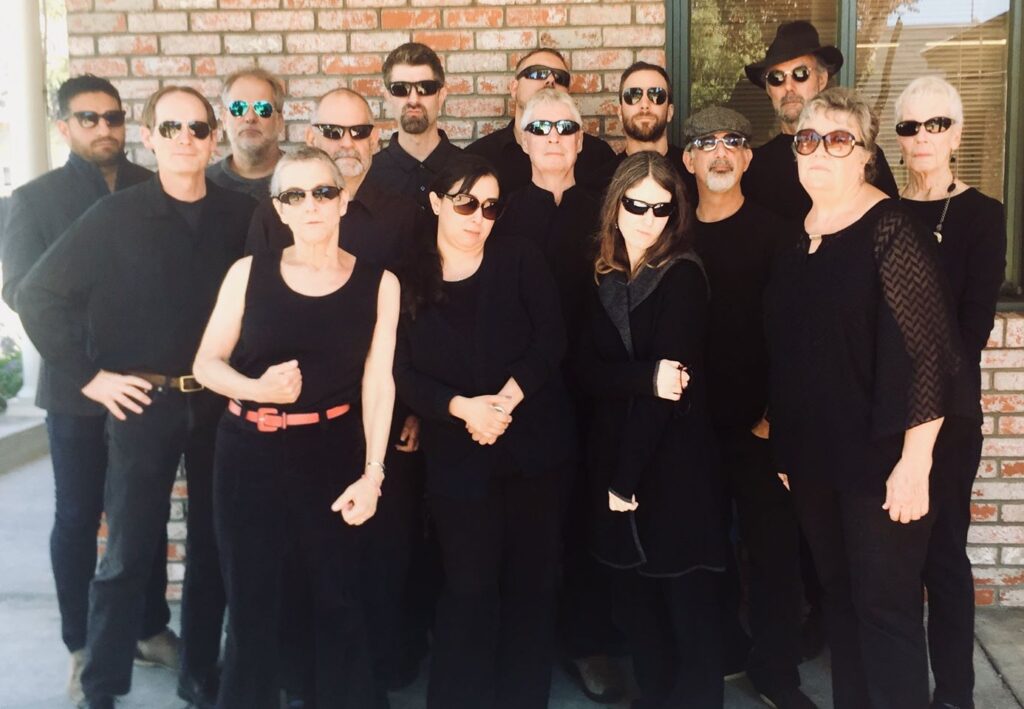 FEASTA– The Ecology of Money- The Foundation for the Economics of Sustainability, based in Ireland, has been promoting ideas related to climate and money.

CapGlobalCarbon– A citizen’s movement to form a Global Climate Trust to implement a science-based carbon cap and distribute revenues to citizen’s as a carbon dividend.

Cap and Share– A campaign started by FEASTA to promote a method of distributing emissions “shares” to people. Also see Carbon Share.

Contraction & Convergence is an equity framework where the 1st world contracts, and the 3rd world converges towards per capita equity in GHG emissions. It may sound unrealistic, but German Chancellor Angela Merkel has been discussing a version of this, per capita as the basis for a post-Kyoto treaty.

“Merkel suggested that as a compromise, developing countries should be allowed to increase their emissions per capita while industrialized national cut theirs, until both sides reach the same level.”

“I can’t imagine that the newly industrializing countries one day will be allowed to produce more carbon dioxide per head than the industrial countries, if we want to come to a fair agreement,” Merkel said.

Good books on climate change: The Weather Makers by Tim Flannery, Heat by George Monbiot, Contraction & Convergence by Aubrey Meyer, The Ecology of Money by Richard Douthwaite, and several books by Peter Barnes including Who Owns the Sky?, Capitalism 3.0, With Liberty and Dividends for All http://peter-barnes.org/book/with-liberty-dividends-for-all/, and Climate Solutions.