As a father of two young boys, I was excited to introduce movies and characters from my childhood to my kids.  However, upon revisiting the Star Wars saga as an adult, I have become troubled by the themes regarding the characters’ relationships with their fathers.  Luke Skywalker confronts his father who has joined the Dark Side, and asks whether his father has any good left in him at all.  The newer Star Wars movies continue the troubled family drama, with Kylo Ren’s father/son pathology, and Rey doesn’t even have a dad.

Fathers play a central, though troubling, role in America’s national political discourse, as shown by cognitive scientist George Lakoff.  The two major political parties mirror two versions of fatherhood: the strict father, and the nurturant parent.  Either mindset can be invoked by using language that triggers a response geared toward punishing bad behavior (strict) or providing help to the wayward child (nurturant). Judeo-Christian religious beliefs in a “Heavenly Father” and an invisible Santa Claus who tracks and categorizes a child’s every action as good or bad, worthy of presents or a lump of coal, are reflected throughout American culture. 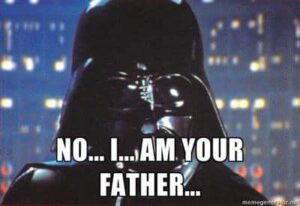 Now that I am at the age where I am making decisions regarding religious instruction (indoctrination?) for my kids, I am revisiting such first principles.  It can be a shock to find out that most parents (unless they are Professors of Comparative Religion) don’t really know that much about religion, and may just be repeating what their parents did.  Or if our parents’ views change drastically later in life, it may feel like we were tricked as gullible kids.

Another thing we learn from our dads: the value of hard work, sometimes taught as: 1) Mow the lawn, 2) Get self worth (in that order).  But is that “life lesson” just a ruse because dad would rather sit on the porch with a beer while the 10 year old does all the work?  Does this life lesson really apply to the current robot-driven, automating economy?

Former U.S. Vice President (and potential 2020 Presidential candidate) Joe Biden is a big proponent of the “Pull yourself up by your bootstraps” mentality.  He learned it from his dad, who said “Joey, blah blah (insert wise advice that was applicable 60 years ago but not anymore).” But little Joey took it to heart, and out of love of family (or at least Dad), God, and country, he refuses to support basic income.

For some reason, moms don’t seem to make this argument nearly as much.  Maybe it’s because they understand that the work they do is undervalued.  Taking care of kids, managing a household, washing the dishes, are all worth zero in the global economy.  Her bootstraps seem nowhere to be found.  Or rather, the man’s fictional bootstraps rely on the woman’s unpaid and under-recognized work.

Biden would do well to acknowledge that basic income is actually 100% pro-worker.  It provides workers more options.  Joe is drenched in nostalgia for his dad and how things used to be (you got up in the morning, you worked at the steel mill down the street, you bought a nice house in the suburbs), but the Millennials are not buying it.   They have hundreds of thousands of dollars in student loans, the social safety net is being shredded right before their eyes, and the jobs don’t make ends meet.

Dads are a source of pathos in Star Wars, but this Father’s Day, maybe it’s time to rethink the conventional wisdom received from our fathers about religion, strict father politics, the idea that hard work at a job equals self-worth or that many of those jobs can even provide a reasonable livelihood without basic income.  Instead, modern fathers in 2018 can share a scientific worldview with their kids, teach them to care for each other because we’re all in this together, and promote basic income, Cap & Share, and other policies to make the world a better place, so that Luke Skywalker, Kylo Ren, and their millions of real life young fans will have fewer reasons to be mad at dads.