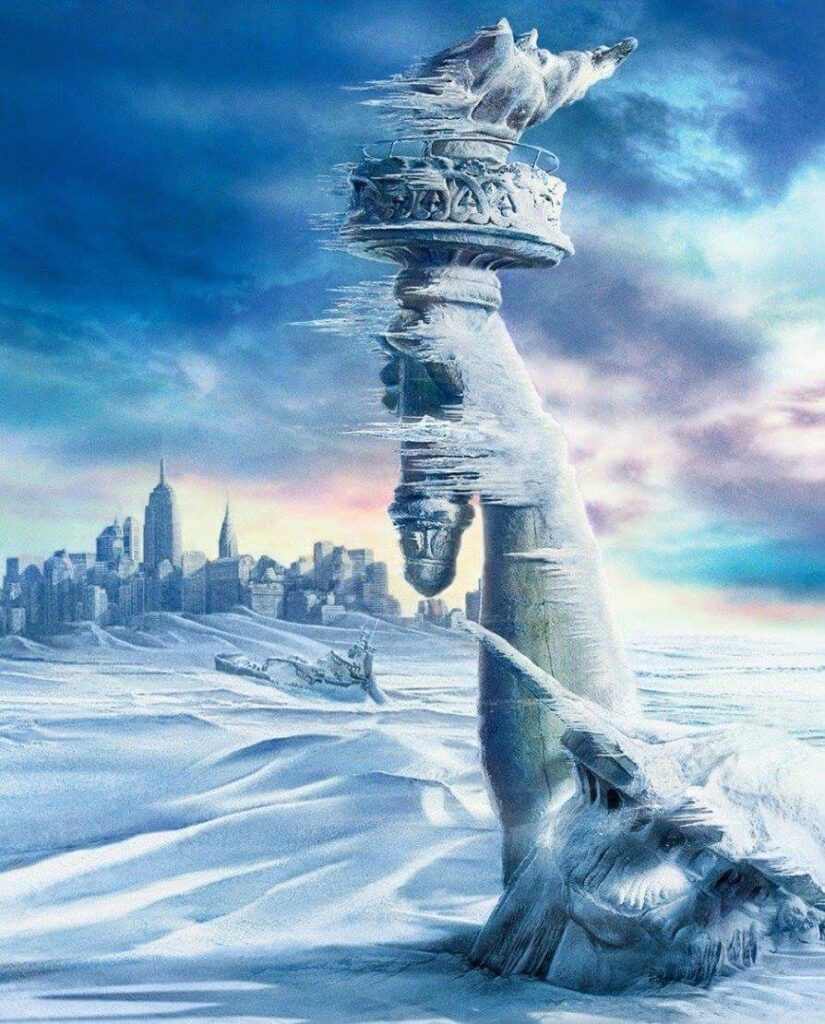 Roland Emmerich is on to something. The Kyoto Protocol expires in 2012, and if we don’t do something BIG to really start reducing greenhouse gas emissions after that, we are screwed in a big, Emmerich-movie-like way. The UN climate conference in Copenhagen starts on December 7th. The so-called “leaders” of the world are busy trying to diminish our expectations and downplaying the importance of immediate, drastic, crisis-response-like action. It is a failure of epic proportions, which becomes clear if you consider the worst case scenarios are simply the end of human civilization, mass extinctions, and a planet dramatically altered from the one on which civilization developed and to which life on Earth is adapted.

Emmerich’s 2004 movie, The Day After Tomorrow, is premised on an exaggerated version of an actual climate change scenario. The North Atlantic Oscillation, part of the oceanic current which circulates heat from the tropics toward the moderate latitudes, shuts down when ice from the polar cap melts, causing a counterintuitive ice age that engulfs most of the Northern Hemisphere. For climate activists, the movie’s payoff comes at the end when the Cheney-like Vice President, in exile south of the glaciers in Mexico, repents for his climate denial. Although it has a B-movie-like script, the potential collapse of the Gulf Stream is not really a laughing matter. It is Scenario 1 in Australian naturalist Tim Flannery’s metaphorical “Pack of Jokers” described in his acclaimed book The Weather Makers.

Flannery’s second Emmerich-like scenario is a rapid collapse of Amazonian rain forest. If precipitation patterns lead to the collapse of those forests, basically the Earth’s lungs, the massive release of carbon could push atmosphere up to 1,000 parts per million of CO2. We’re currently at 387, and scientists say that the safe level is back down at 350.

Flannery’s third scenario is a giant methane release from ocean floor, which is thought to have caused a global extinction 55 million years ago . Pressurized methane in tiny ice crystals known as “clathrates” could be released by a warming of the ocean that melts the ice crystals. Similarly, a melting of the permafrosts in Siberia could release enough methane to catapult us past the worst IPCC projections.

But Flannery describes an even more horrifying scenario in his most recent book “Now or Never.” Strange purple bacteria and green sulfur bacteria take over, and change the ocean purple and the sky green. The excerpt below is taken from here:

If warming slows the ocean circulation, and bacteria that don’t require oxygen multiply and emit huge volumes of sulfur. Eventually, the sulfurous, oxygen-starved water reaches the sunlit zone, and then the green sulfur bacteria flourish, producing huge volumes of toxic hydrogen sulfide, which enters the atmosphere in great belched bubbles, destroying much life on land. The gas rises high into the atmosphere, where it destroys the ozone layer, and the increased ultraviolet (UV) radiation devastates what is left of life on Earth. What does an Earth with a dead ocean look like? Peter Ward, a paleontologist and expert in his field, imagines it as follows:

Look out on the surface of the great sea itself, and as far as the eye can see there is a mirrored flatness, an ocean without whitecaps. Yet that is not the biggest surprise. From shore to the horizon, there is but an unending purple colour — a vast, flat, oily purple, not looking at all like water. … The colour comes from a vast concentration of purple bacteria. … At last there is motion on the sea, yet it is not life, but antilife. Not far from the fetid shore, a large bubble of gas belches from the viscous oil slick-like surface. … It is hydrogen sulphide, produced by green sulphur bacteria growing amid their purple cousins. There is one final surprise. We look upward, to the sky. High, vastly high overhead, there are thin clouds, clouds existing far in excess of the highest clouds found on our Earth. They exist in a place that changes the very colour of the sky itself. We are under a pale green sky, and it has the smell of death and poison.

Who knows if this would play out a few centuries from now, or millennia from now, long after we’re gone and forgotten. Even more likely than these nightmare scenarios is a climate change-accelerated breakdown of the world’s agricultural and economic systems, refugees, extinctions, diseases, mass migration, and increased Malthusian resource wars. In the meantime, there’s enough material here to keep Emmerich busy, and John Cusack, Will Smith, and Dennis Quaid employed for years to come.

The slow-motion failure of Copenhagen is too low-tech for a Roland Emmerich disaster movie. Instead of “Hopenhagen“, I have a deep and growing anxiety, watching our “leaders” do essentially nothing about climate change, as the Nobel Peace Prize winner announces that he will send 30,000 more troops to war. For cathartic effect, HuffPost Green readers may want to go see 2012 on Dec 7th, the day the Copenhagen climate conference starts.

But December 7th doesn’t have to be another “day that will live in infamy.” Instead of the current failed zero-sum bargaining around arbitrary targets and timetables, the nations of the world can endorse an equity framework such as Contraction & Convergence. It could be implemented here in the U.S. through Cap and Dividend, and abroad through Cap and Share.

Sharing the wealth in this way could help defuse a populist backlash against rising fuel and electricity prices and avoid a 2012 disaster of another sort: Sarah Palin. Hey, that gives me an idea for the next Emmerich movie. Is Tina Fey available?